Matthew Henson’s family had to wait weeks to find out what had happened to him, even though they had reason to fear the worst. And that was only the beginning: Though they finally found out a few nightmarish facts, the case leaves them still waiting for answers almost 20 years later.

Delaware State Police recently brought the case of Matthew A. Henson forward again, asking for the public’s help in what homicide investigators are calling a suspicious death cold case. Henson was found dead in a burning car near Farmington, Delaware in 2002.

It reads like a detective story with hints and leads except there's no Sherlock Holmes to set things straight in a few pages, and for the family, no next chapter to turn to.

At first it was two cases. Henson, 18, from the Denton, Maryland, area, disappeared on Sept. 9, 2002. A recent graduate of North Caroline High School who had been an honor student, Henson was attending Chesapeake College. He loved cars and worked at an automotive accessories business in Delmar, Delaware, police said. Henson was a member of an area car club and bought, sold and traded automotive accessories on the side.

Also on Sept. 9, police were called late in the evening to a rural area west of Farmington, Delaware, where a local resident reported shots fired on Gingerwood Drive, just north of Andrewville Road, the Sept. 11 edition of the News Journal reported. Police said a witness described going outside and seeing a fire in the distance. Farmington firefighters were also called and found a Chrysler sedan “engulfed in flames” near the road, the article said. After they put out the fire, they made a horrifying discovery: A body “charred beyond recognition” in the trunk of the car.

The rural field was only about 15 miles from Henson’s home, and investigators quickly got leads indicating the body in the car might have been Henson’s. Word got around among Henson's friends, too, but there was no way to be sure until DNA evidence came back. From the remains, investigators couldn’t even tell if the body was from a male or female or even use dental records, the Times Record of Denton reported.

“A Denton area family is holding out hope that two Sept. 9 incidents are not related,” the Times Record reported more than a week later. The newspaper, too, held out a little hope, noting the missing person investigation was ongoing and describing Henson’s appearance: 5 feet 9 inches tall, 140 to 145 pounds, short brown hair and hazel eyes.

It would be weeks of waiting to find out for sure.

By early October, almost a month after Henson’s disappearance, the DNA results confirmed the suspicions and ended any hope. The remains were Henson’s. On Oct. 20, his parents held a celebration of life for Henson at their home, and friends soon organized a memorial car show as well. Henson’s family also offered a reward for information leading to an arrest.

“Teen-ager’s body positively ID’d: Mystery unanswered in Henson case” was the headline in the Times Record. The question of identity was answered, but the real questions, the whys and the whos, weren't. 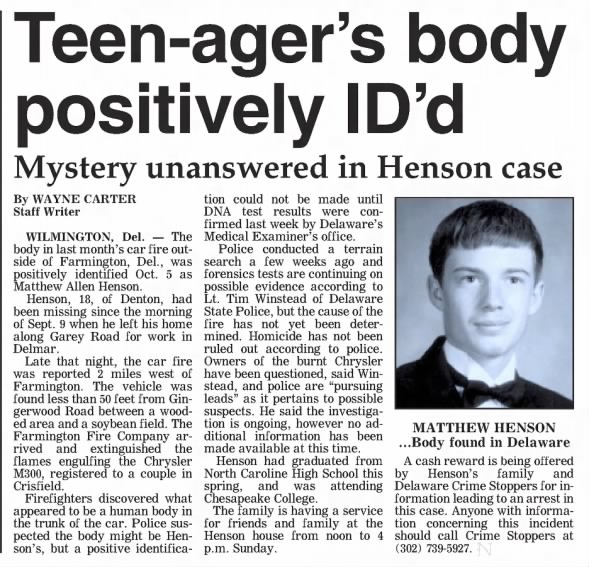 The details of the case were unclear enough that police merely said that homicide hadn’t been ruled out, and still only call it a suspicious death. It’s unclear what evidence they have gathered in the years since, and after the recent press release, state police did not respond to a request to talk to them about the case.

Police were able to track down the owners of the burned car, who lived in Crisfield, Maryland, and questioned them. But they offered little further information, except to say they had done forensic tests and a search of the terrain and were pursuing leads.

Decades later, those leads have yet to come to fruition, but friends and people connected with the case have not given up on finding out what happened and bringing some justice.

In September, police urged anyone with information that could help solve the case to call the Delaware State Police Homicide Unit at 302-741-2703.

Information from the Denton Times Record and Wilmington News Journal.

Sign up for more local stories from the Delaware Independent.